A day of rehearsals and interviews was followed by Mt Bocelli's incredible(as ever) performance of 'Mamma' ! 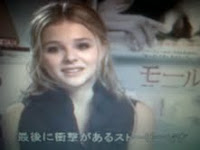 Chloe on You Tube at the Japan Press day we did last month...

A review of my work with Nicole Richie - GLAMOUR AWARDS!

Well, just came across this while searching for an image of Nicole I couldn't find, wen I saw this feature on the HAIR & MAKEUP I did for her at The Glamour Awards in London...

Happy practicing everyone...send me your shots from replicating this...would love to see them!

Seriously, could Nicole Richie be any cooler? Her hair is always so effortlessly gorgeous looking and this voluminous ponytail she wore to the Glamour Women of the Year awards in London on June 8 is no exception. I love the massive amounts of volume that Nicole has at the crown of her head and the center-parted, close-to-the-head front. Notice how Nicole positioned her pony to the side of her head allowing her tousled locks to cascade down the side of her neck and shoulder. It’s incredibly flattering and casual enough that any of us can wear the same look too. Do you love Nicole’s party pony as much as I do?